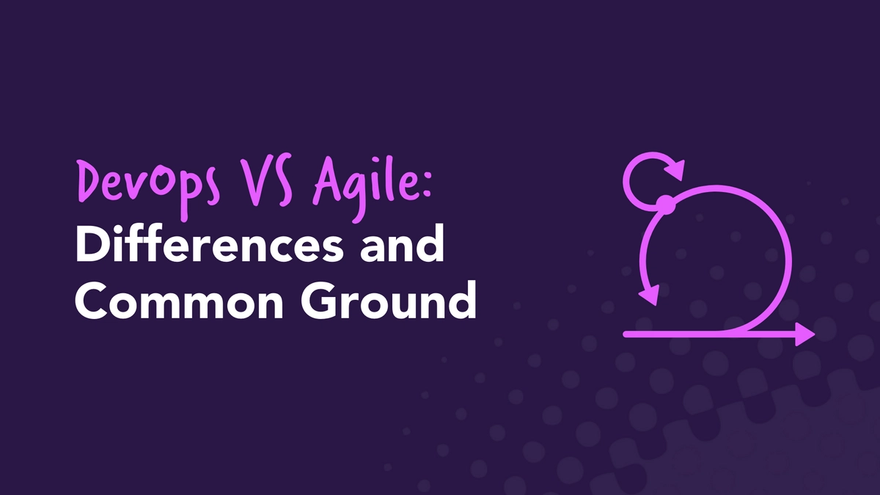 DevOps vs. agile—what’s the difference? These two methodologies have a lot in common, but there are also many key differences that we’ll discuss in this post. You might say they compliment each other. We wouldn't go so as far as to say they’re like peanut butter and jelly, but when used together, they certainly make for a nice combination.

Sound simple enough? Well, there’s a lot more to it than that. Let’s dig a little deeper into the definition of both agile and DevOps, what these methodologies have in common, what makes them different, and how they can work together.

The agile methodology was first popularized in software development, but in recent years, agile practices as well as the guiding principles of agile have expanded into a range of different industries that want to prioritize continuous improvement and growth.

Agile focuses on flexibility, adaptability, collaboration between team members, and delivering consistent value to stakeholders through continuous customer feedback and rapid releases. Each iteration offers fresh insights into what is and isn’t working and what could be improved upon. It’s a multidimensional approach that eliminates the bottlenecks so characteristic of traditional project management.

Agile teams can implement agile in a variety of different ways, including Scrum, kanban, lean, and more. A key benefit of agile software development is the ability to bridge the gap between customers or users and development teams.

Learn more about agile, dig into the Agile Manifesto, and read our article: Agile 101: A Beginner's Guide to Agile Methodology.

DevOps is a software development method that empowers teams to build, test, and release software quickly and consistently with the integration of agile practices and principles, including enhanced automation and improved communication and collaboration between development and operations teams.

DevOps focuses on aligning development and IT operations to better manage end-to-end engineering processes. In the past, development teams would write applications and then pass them along to an operations team that would then deploy and manage the software. The problem with this approach is the operations team is given no insight into how the application was developed.

DevOps practices bridge the gap between developers who develop and write the software and operations who run the software.

DevOps vs. agile: What do they have in common?

Both agile and DevOps aim to aid the software development process, but where did they come from, and what commonalities do they share?

In this “which came first, the chicken or egg?” scenario, we do actually know which came first. 🐓🥚 Agile, which gained popularity in the early 2000s, provided development teams with an approach to solving complex problems. While agile solved many problems, there was one disconnect that remained — the operations teams deploying the software were sidelined and remained in a silo, missing out on the benefits of agile.

The result is development practices that run smoothly from one team to the next, a heightened consideration of the user, and continuous delivery to both customers and stakeholders.

So, in many ways, DevOps is an extension of the original agile methodology. DevOps teams  zero in on a key aspect of the development process to bring development and operations together. Many of the same agile principles are applied, such as continuous deployment, improved collaboration, iteration, and automation, and implementing feedback at every turn.

Key differences between DevOps vs. agile

While agile and DevOps have a lot in common, there are a few key differences to be aware of. The differences mainly stem from the different types of teams utilizing agile principles. These different teams have different needs, work at a different pace, and are guided by separate feedback systems.

Bridging every gap in the development process

Let’s bring it all back to the simple definition we began with. Although there are many complexities, similarities, and differences between DevOps vs. agile, in basic terms, it comes down to this:

Agile, which came before DevOps, is a broad methodology that primarily focuses on bridging the gap between the customer/user and development teams. DevOps, which came second, utilizes agile practices to fill the void that remains between development teams and operations teams.

Join a demo to learn more about our tools

OR sign up for a free trial to see our plugins in action.

We also have a wealth of content on our blog, including how-to articles, agile explainers, and thorough guides that dig into the agile process. You’ll find our resources especially helpful if you or your team utilizes Jira or the Scrum framework.